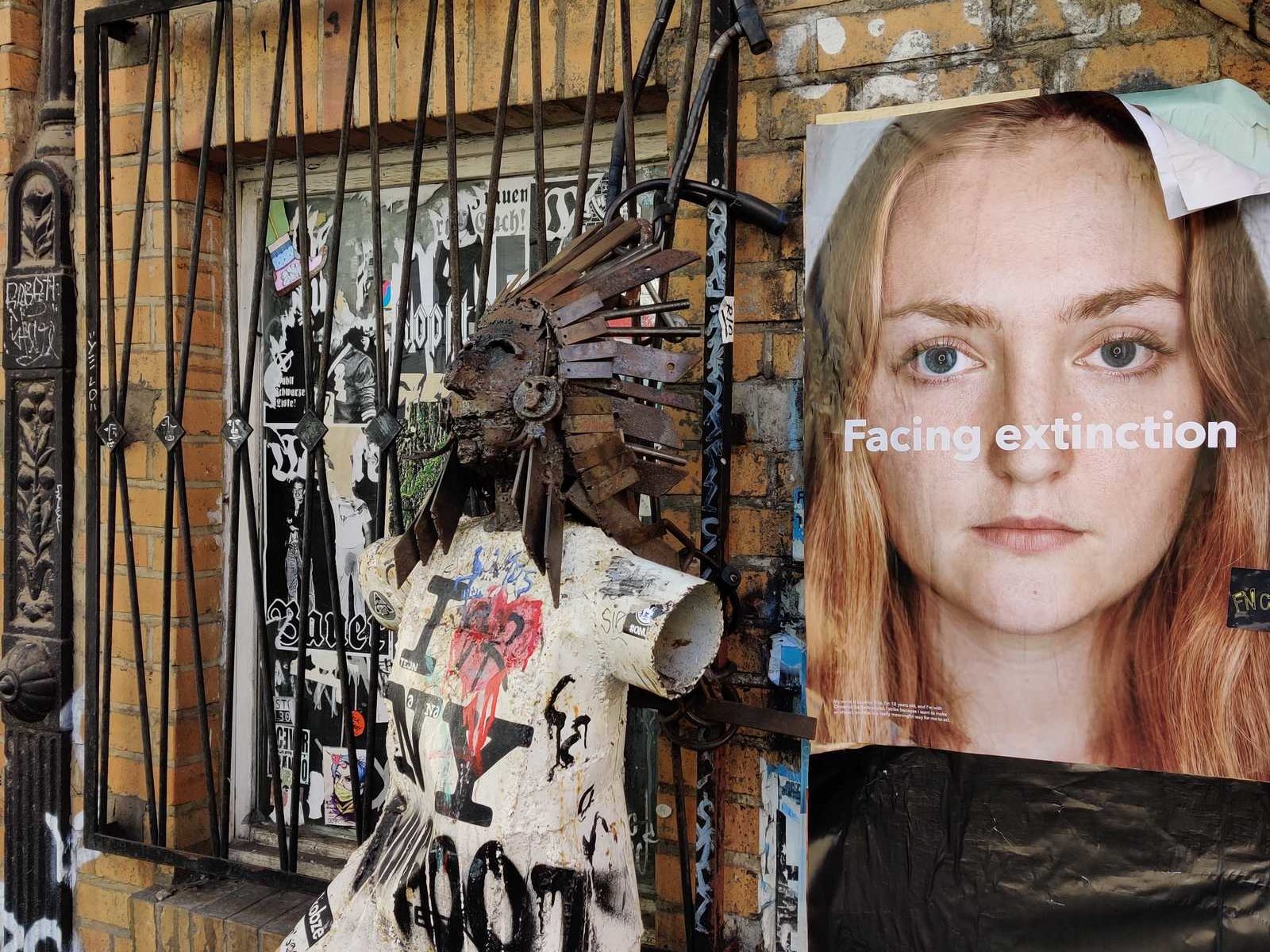 Facing Extinction ? An artsy wall in the heart of Berlin near Hackesche Markt.

The most important news at a glance – Our half-monthly press review of the calendar week 40. This week: A lot of urban culture from France and an interview with city planner Richard Sennet. In addition, nest-fighting on Cologne’s Schälsick site, extinction rebellion in the headlines and a summary of last week’s events in Hong Kong. The most important urban news of the week in Weekly Urbanauth.

In an interview with Mediapart, urban planner, philosopher and sociologist Richard Sennett spoke about the hurdles of urban development, then as now. His latest book examines the relationship between city and life to understand whether urban planning should represent society as it is, or whether it should change it, and if so, how. The question of to what extent social, modest urban planning is possible in dialogue with the inhabitants while at the same time taking account of global capitalism is a central point of discussion. He notes that, given the intentions of urban planners, there has always been a long way from planning to reality. So its a paradox that Baron Haussmann, of all people the most reactionary of the “Great Generation”, created streets and public spaces that functioned well socially. Over the centuries, Sennett has made a common observation: the shape of a city does not determine the forms of life it adopts. This is most evident in Brasilia, the Brazilian capital built in the 1950s. A larger, poorer, more chaotic but also more social and economically intensive city emerged around the planned form.

On the Gare du Nord project in Paris, Sennet notes that, on the one hand, it is a symbol of the gap between urban planning and the way people actually live. On the other hand, it is also symptomatic of the ever-growing importance of capitalism and big business for today’s urban development. The project is far too big and does not fit into the neighbourhood.

After the TuMalWat Days in Berlin, another Reclaim the City squatting continues. From the east of Germany to the west to Köln-Kalk. An empty house on the Schäl Sick side of Cologne was occupied for two days on the third of October. The political occupation of Dieselstraße 15, which was vacated by the police after two days, was based on the initiative “Nestkampf“. At the beginning of May, it had already hung banners on two empty buildings in Loestraße to draw attention to gentrification. According to the activists, 120 apartments were empty. During the evacuation of Dieselstraße 15, 22 people were found in the building by the police. Three of them were then taken to a police station.

The Banlieues of Paris show their art treasures!

“Trésors des Banlieues” – Treasures of the suburbs, this is the name of the art exhibition that will take place on 4 October in a suburb of the french capital, namely Gennevilliers. Until 30 November, 260 works of art from over 50 Paris suburbs will be exhibited. The works will be presented to the public in the Halles des Grésillons. From a multitude of expressionists like Chagall to contemporary street art with Miss Tic, the Banlieues have a lot to show. The exhibition focuses on contemporary art and exhibits works from the end of the 19th century to more modern times. The history of Gennevilliers is addressed around the core theme of the industrialized city. On the timeline, the once agricultural banlieue later wandered through a time marked by precarious poor quarters and finally reached today’s time, a stage before the fusion into the “Grand Paris”.

To cross the artistic currents of past and present to try to sketch an answer to what makes the Banlieues so unique.

The French architect Patrick Bouchain was responsible for repairing the empty market hall built in 1980 in the “Les Grésillons” district. This year awarded the Grand Prix d’Urbanisme for his life’s work, the architect, who was born in 1945, is an icon of French architecture. In addition to his participation in the founding of the École nationale supérieure de Création industrielle (ENSCI-Les Ateliers) in the early 1980s, he is particularly known for his human approach, which seeks to involve residents in the process of renewing urban spaces. The “Au fond à gauche” collective was responsible for the design of the interior, which, through its choice of shipping containers, refers to the history of the harbour town.

Export commodity Centre Pompidou – Made in France now in Shanghai

As reported by the English online magazines TheArtNewspaper and deezen, a branch of the Centre Georges-Pompidou opened in Shanghai on 8 November. In the Xuihui district with its twelve quarters, the museum is moving to the water side of the Huangpu River. Developed with the local administration and the West Bund Group, the French cooperation came up for the first time in 2007. The building, which is a side wing of the West Bund Museum, was designed by architect David Chopperfield. Until 2025, contemporary Western and Asian art will meet at the Centre Pompidou x West Bund Museum.

The original Centre Georges-Pompidou in Paris was opened in 1977 in the heart of the “Le Marais” district. Named after French President Georges Pompidou (1969 – 1974), the museum houses TMOMA in New York and Tate in London, as well as the world’s largest and most important contemporary art collections. The branch offices offer an excellent opportunity to show the otherwise only intermediately stored masterpieces to the public. In 2010, a first branch opened in Metz, followed by the next in Malaga, Spain, in 2015. In addition to the Centre Pompidou x West Bund Museum, a Centre Pompidou will be built in 2020 in a former Citroen automobile garage in Brussels.

Hong Kong – A ban on hiding ones face fuels anger

Last Saturday violent clashes with burning barricades and devastation of both metro stations and shops occurred again. For this reason some supermarkets had been closed and the Metro had been shut down for one day.

Carrie Lam, head of government of the Hong Kong Special Administrative Region, resorted to the Colonial Emergency Law and issued a Ban on Masking. This prohibits the wearing of masks during demonstrations. The law passed by the head of government without the consent of parliament. Carrie Lam can use the Emergency Ordinance to enact “regulations of any kind she deems desirable in the public interest”.

The pro Democratic grouping in Hong Kong has attacked the ban on masking law and will have it judicially reviewed by the Supreme Court towards the end of this month. Demonstrators use masks to remain undetected and to protect themselves from tear gas.

The Beijing government supports Carrie Lam’s approach. The protests, which have been going on for over 4 months, are taking place due to a very controversial extradition law and continue to increase in intensity. For example, Carrie Lam now threatens with intervention by the Chinese military, if the situation does not ease soon.

Extinction Rebellion in the headlines

“Extinction Rebellion (short XR; English ‘rebellion against extinction’) is a worldwide social movement that uses civil disobedience[1] to fight the mass extinction of animals and plants and
the possible extinction of mankind as a result of the climate crisis and the destruction of habitats.”

The movement originally comes from United Kingdom, but has subgroups in many larger European cities. Several hundred environmental activists of Extinction Rebellion have occupied a Shopping-Mall at Saturday, 05.10.2019, in the southeast of Paris, they want to draw attention to the inactivity of the government in the matter of climate crisis. The “Iatlie Deux” shopping centre in the 13th arrondissement is to be occupied as long as possible, Extinction Rebellion in France announced on Twitter. After 18 hours the occupation of the shopping centre was broken off again.

On Saturday, 05.10.2019 a climate camp was established in Berlin in front of the Chancellery. Thousands of people gathered there. Lectures, workshops, reports by those affected and film screenings are shown. From Monday on also the traffic in the German capital was obstructed. Extinction Rebellion advised people to not use their cars. Demands of the group are among other things the proclamation of the climatic emergency state and the reduction of the CO2-emissions until 2025 on zero. From October 7 on there are scheduled two more weeks of protests by the group.