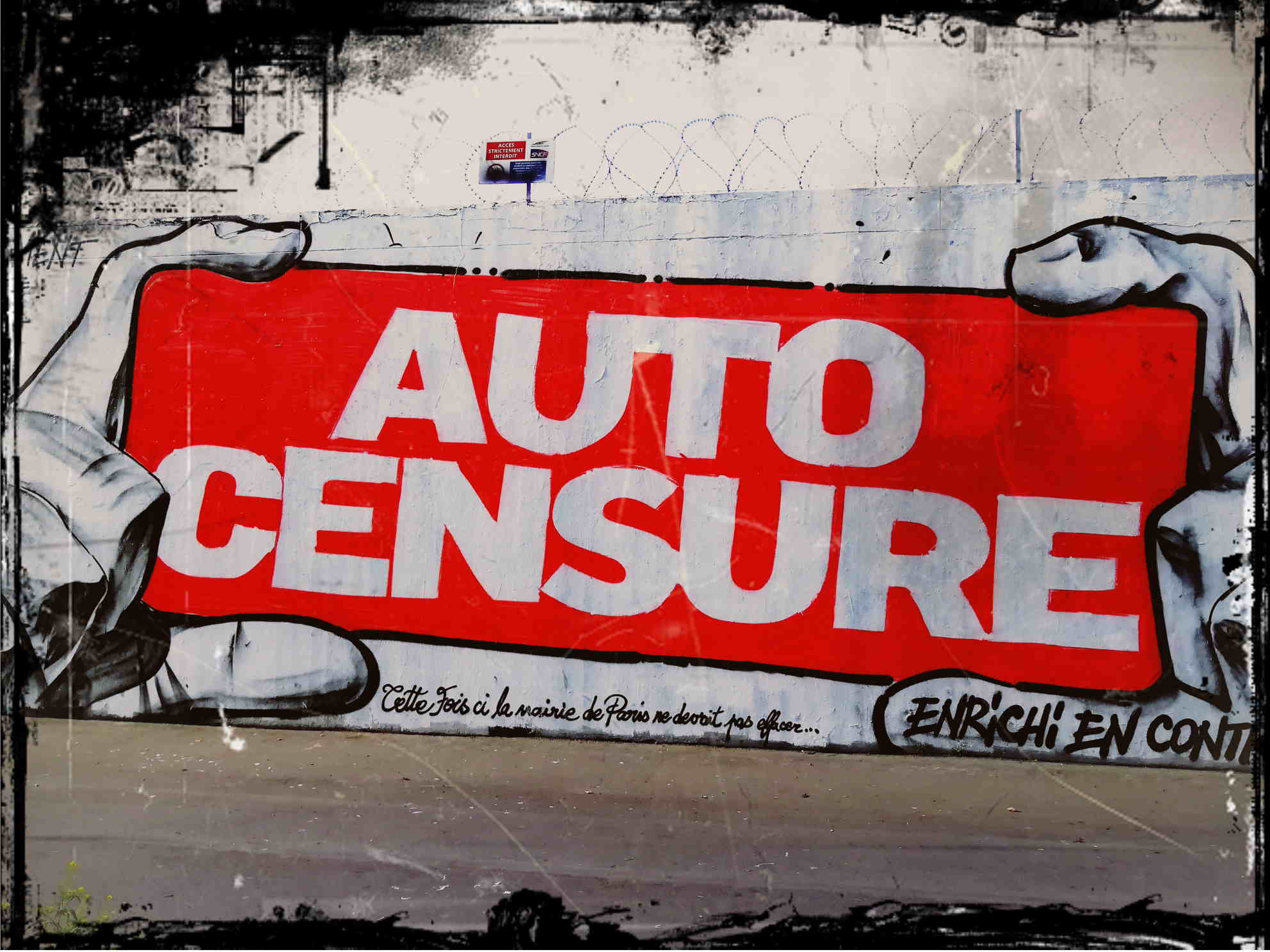 Autocensure - extra large - so that nobody can overlook it.

The movement of the Gilets Jaunes has a strong will to express itself. Be it in demonstrations, through colourful signs and disguises – or taggs on the walls. The local graffiti and streetart scene, of course, uses the opportunity to give the street a voice. Various artists met in the Black Lines community to create socio-critical walls in the context of the Yellow Vests. The graffiti jams took place in May on Rue Ordener in the 18th arrondissement north of Paris.

At the beginning of the year, Black Lines had already realized a long wall with various artists. At that time the main theme was “hiver jaune”, which means yellow winter. However, the administration of the 19th district reacted quickly and had the wall painted grey. One of the images that stirred up controversy was the fresco showing the boxer Christophe Dettinger, created by artist Skalp. Dettinger had pushed the police back on a bridge in Paris with fist blows.

The reaction of the city, however, is perceived by the artists as censorship. It is obvious that the artists won’t put up with this – and so it goes into the next round. In the fresco by Monsieur Plume /RC/OTM, black-clad figures gather around a table on which there is a red book that a person seems to be reaching for. The grouping of black masked figures gives the impression that a conspiracy is in progress. To the left, there is an isolated spray can on the table, while on the other side, a masked man with a bat is sitting next to a standing person taking the floor. What these people are discussing is not known. However, the leading theme of the Black Lines Edition clearly stands out: censorship and freedom of expression. Also present: Slyz, bricedu, Torpe and Vince.

The weekly recurrence of violence is a major issue among the supporters of this social movement. This is addressed by the artist Slyze (right) with his picture, a photo after Bsaz. The photo shows a policeman who seems to hit a demonstrator with a bat. “Resistance” is written on his back. The red banner in the background, which rises in front of black clouds of smoke, says: “The sprayers get out the paint bombs” – An appeal to dip the city in paint and to be civil disobedient? On the lower lettering it says: “The state gets the Kärcher out” – In combination with the act of violence in the picture, the allusion to the high-pressure cleaning device can seem confusing.

The fact is that cleaning crews clean up in the hours after the major demonstrations. As was the case during 1 May, when the empty grenade shells of the Flashbangs (GLI-F4) and tear gas cartridges, as well as rubber bullets, were cleaned up first and foremost. This is followed by transporters in which the mountains of waste are collected. The next day, the first tags disappear from the walls and wooden screens of the shops and form patchwork patterns in the facade. Some streets are kept so clean that after a few days all traces of any space appropriation disappear. Urbanauth was able to see the Kärcher in action on the Sunday after 16 March, when convoys of workers tried to repair the damage to the Champs-Elysees in a hurry.

This socio-critical work can be understood as a representation of the public pressure on the demonstrators. Freedom-loving Marianne finds herself in distress and has to justify the violence to the media. Thus, in her opinion, the most severe violence comes from the state itself, in the form of physical violence: during the demos or in the suburbs, but also in psychological form: Such as cuts in social security benefits, pensions or the closure of public places and the feeling of not being heard by politicians.

The Media in front of the yellow vests

In the masterpiece of the Parisian sprayer Vince, two hands hold a red sign on a ten-meter-long surface on which “auto censorship” is written. The sentence below says: “This time the city administration won’t make it disappear…“. And it probably alludes to the action of the city administration when the last Black Lines meeting was overpainted in gray. Below right one reads sarcastically: “Enriched with social control”. In the picture series the complete size of the fresco can be seen. At the top it says: “Guaranteed without Barbara Streisand effect“. The Barbara Streisand effect is unwanted information, whose cover-up attempts only lead to the information becoming all the more well-known. This effect is not required for this work of art, because: The passers-by react anything but indifferent. They use the opportunities to picture themselves with “auto censorship“.

The behavior of the media towards the social movement is also strongly criticized. While riots against police officers tend to be the focus of the media, acts of violence against demonstrators are much less strongly addressed. The independent journalist David Dufresne, who has been collecting testimonies and video material on police violence since the beginning of the Gilets-Jaunes movement, comes up with no less than 803 violations at the end of May 2019.

The media live when the road dies. That’s an information, not a rumour!

The woman in the picture – where she’s on her way? – runs past a television set drawn in thin black lines. A timer shows the numbers 13:12, while wires on the side bowl lead to dynamite rods. The device contains three carrots with name plates underneath: One for TF1, which belongs to the Bouygues group; one for CNEWS, which is linked to the Bolloré group; and the last one goes to BFM(-TV). These three television channels are owned by private investors. Among them are the crème de la crème of the French business elite: Vincent Bolloré, Martin Bouygues…

It is not for nothing that a lettering chants on the top page: “The media live when the street dies. That’s info. No rumor!“. Because while on the riot Saturdays of December 1, 8, 2018 and March 16, 2019 the viewer numbers at the TV stations went through the ceiling and presenters ran hot. It should be noted that not all media are hated. The Gilets Jaunes respect independent journalists who are intimidated by the state. We reported about it.

The street sign ” Square for freedom of opinion”, a glued poster, is surrounded on the left picture by barbed wire. Two surveillance cameras point symbolically to the rising surveillance, while a small, mischievously smiling bear sits under the sign and holds a grenade in his hand. As a mere spectator one is tempted to ask oneself, when the grenade might go off.

The guillotine, an invention from the time of the French Revolution, is an ax with which the King Louis XVI, among others, was beheaded. In the left picture it is pointed at a pencil with the name of the organizing association on it. While the first graffiti jam was painted gray by the city administration under the motto “Yellow Winter”, the focus of the last jam is on freedom of expression.

The artists were attacked in their honor – but the dissatisfaction is not only noticeable on the part of the graffiti scene. In an open letter at the beginning of May, the YellowSubmarine collective called for solidarity with social protest movements and not to look away from the acts of violence. The collective consists of artists from various disciplines. Their petition now has over 26,000 signatures.

And even the artist, who may be Koz1, seems to have lost patience with the state. In his hip-hop clothes, his angry monkey stuffs a 600 milliliter high pressure spray can into the mouth of a caricatured president. Of course in neon yellow. The groovy “GJ” graffiti in the background, the initials of movement. The tie that blows away from the maltreated statesman says: “Art is public. March back.” The “En marche arrière” contrasts with the name of the ruling party: “La République en marche” (/LREM), which can be roughly translated as “The Republic in Motion”. An announcement that may have to do with cuts in the budget for education and culture, as well as a perceived degradation of working conditions.

Somebody’s got one more word to spray.

TPK, also known as The Poor Kids – one of the most notorious graffiti crews in the French capital – did not quite agree with Black Lines. The crew members: Relax, Craze, Eby, Keas, Blod, eyome, Knyze, dkc showed this a few days later after the event. The Hall of Fame on rue Ordener is known to belong to the old-fashioned sprayer crews. Greenhorns and strangers are undesirable. Even though the graffiti scene is close to the Gilets-Jaunes movement, as the unpredictable crowd covers the sprayers. And even though the city becomes a playground for them on Saturdays, the walls along rue Ordener are of great importance to the local crews. In the first picture, the work is sprayed in yellow and careless letter styles, matching the theme. The spared message says: “The revolution is the revelation on the horizon“.

In the second picture the statement of the artist Adam Yuul has also been spared. In red letters he warns of three epidemics: Castagnitis, Rugyole and Penicose. The first one refers to Christophe Castagner, Minister of the Interior and leader of the LREM party, while Francois de Rugy, Minister of the Environment, and Muriel Pénicaud, Minister of Labour, are named. In connection with the demands: Interior – think of the police violence and provisional detention and surveillance. Ecology – which Macron promoted in his electoral program without success. Work – one of the basic motives for the creation of the Gilets Jaunes is the decreasing purchasing power combined with wages and the large structural differences in the country. The fresco can be understood as a criticism of the neoliberal economic orientation of the ruling party, which is why the artist finally warns not to leave the house without the yellow vest.

The article is available in German and French. Images by Urbanauth.
Note: The lettering and quotations on the walls have been freely translated and adapted to English. The image interpretation is only one of several possible perspectives.