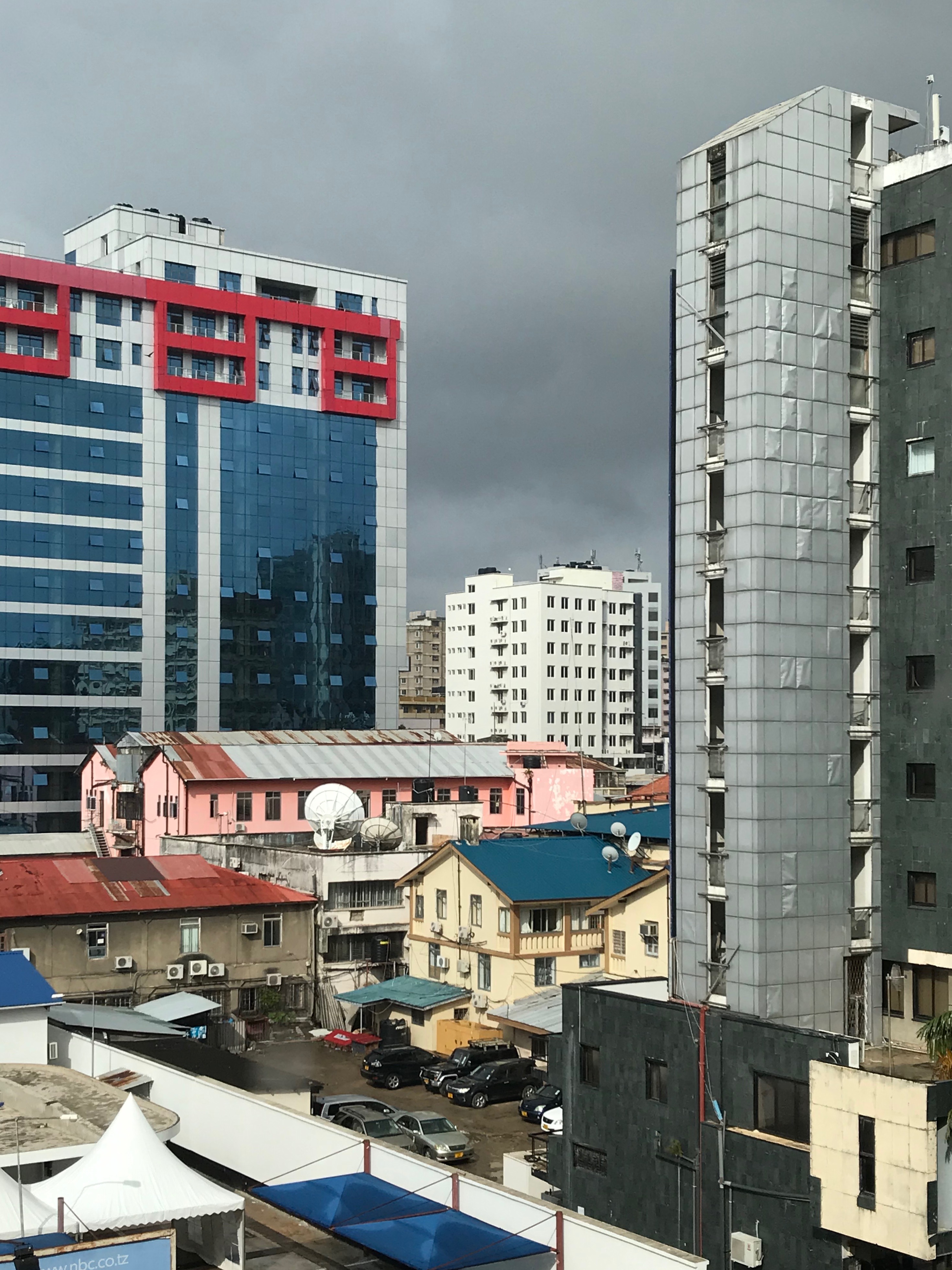 View on a megacity

From a small harbour town to a mega-city

Dar es Salaam, trade and centre of Tanzania is growing. With an estimated population of 6,701,650, it is one of the fastest growing cities in Africa. In 2030 the population is estimated to exceed the 10 million mark. Dar es Salaam will then join Lagos (Nigeria), Luanda (Angola) and Kinshasa (Congo) as one of the biggest cities in the sub-Saharan region.

Until the end of the 19th century, Dar es Salaam was a small town with a port, founded in 1862 by the Sultan of Zanzibar. In 1888, his successor sold the town to the German colonial masters, who moved their administrative headquarters from Bagamoyo to Dar es Salaam in 1891. During the German colonial period the city experienced an economic boom. The expansion of the German East Africa railway line, which runs for 1,252 km across the country to Kigoma in the west, led to an enormous boom in trade activities.

Even today, the port still contributes to the importance of Dar es Salaam. As the second largest port in East Africa, a large part of the trade traffic runs from there to the neighbouring landlocked states of Malawi, Zambia, Uganda, Burundi, Rwanda and the eastern Congo. Tea and coffee, cashew nuts, sugar cane and other goods leave the port for Europe, Asia and the USA. As the largest city in Tanzania, Dar es Salaam is not only a trading centre, but also the headquarters of banks, insurance companies and businesses. Parliament and government, on the other hand, have been based in Dodoma, the capital in central Tanzania, since 1974. Dar, as the city is called by the locals, is also home to the country’s most important and largest university with almost 20,000 students.

The city plays also an important for the work of NGOs and international organizations as well as for diplomats. Many countries have their embassies here. Conference centres and large hotels with modern standards are used for meetings and congresses. However, most tourists visiting Tanzania use Dar es Salaam only as a stopover. From Julius Nyerere International Airport, regional airlines fly to the north and northwest of Tanzania, where the Kilimanjaro region and five national parks (Serengeti, Tarangire, Lake Manyara, Ngorongoro Crater area) cover an area of almost 26,000 sq km..Those who stay in the city for a few days can stay on the northern Msasani Peninsula with its beaches, clubs, bars and hotels or take the ferry to Zanzibar.

From colonial to global architecture

The centre of the city with the port, traditional markets, restaurants, schools, churches, office buildings and hospitals dates back to foundation of the old city. Historical buildings from the colonial period alternate with modern buildings, made of reinforced concrete and simple, outdated residential and commercial buildings. The National Museum of Tanzania and the Botanical Garden are also located in the heart of the old Dar es Salaam.

How long buildings like the Magistrates Courtone built by Germans in 1890 as one of the first ‘standard houses’ will ‘survive’ the waves of modernization, is unclear. Building, like the Court of Appeal, where the English author Evelyn Waugh lived in 1959 writing about the city for her book A Tourist in Africa, have been demolished. Buildings from the 1930s integrating Indian and European building elements, with balconies and porches protecting the inner from the heat, have been replaced by new buildings. Those have glass fronts. Their interiors have to be kept cool by air conditioning. The new tall buildings with their reinforced concrete and glass facades could also be located in Tokyo, Sydney or Buenos Aires. One could almost forget being in East Africa looking upwards to the new high building. But walking in the streets you will find all the things that make up urban life: women and men sticking their heads together for a chat, salesmen doing their business, children running home from school.

The mix of different cultural influences is the reason for the charm of the city. Besides the modern buildings, countless churches of different Christian denominations, mosques and Hindu temples cannot be overseen. For the vast majority of Tanzanians, religion is an important part of their daily live. Muslims, Christians and Hindus live peacefully together. The official holiday calendar knows both Christian and Muslim holidays. Every newcomer brings not only his religion, but also new sounds, colours and smells.

Music accompanies everyday life: Strolling the streets you will hear Bongo Flava, the Tanzanian version of HipHop, comes along with Taraab, a popular mix of Arabic, Indian and African sounds as well with rap, jazz and gospel. Smells of Indian curry coming from the street kitchens. The scent of coconut mixes with that of fresh fish, pineapple, mango and papaya. Women are peeling potatoes, and roasting sweet corn. Men are offering fresh sugar cane as a candy. And everywhere there are merchants with carts, on which water in plastic bottles is offered for sale. Besides food, small meals and drinks, goods and services of all kinds are offered on the streets: Tailors sit on the pavement and sew, shoes are polished, and hair is artfully braided.

The sidewalks serve as a kind of ‘open air’ shop window for all kinds of goods: lingerie, trousers, magazines, CDs, jewellery, soaps. Everything that can be sold is offered here. Only more prosperous small businesses can afford the rent for a small shops in a building. There is usually no border between private business and public space. Shops in western style are not common. You will find them almost only in the large shopping malls in the suburbs.

The Tanzanians do their daily shopping at the market. There you find everything you need to prepare your daily meals: besides vegetables and fruits, there are bags of nuts, rice and all kind of beans. Spices and tea can also be found, as well as eggs, fish and meat. The few supermarkets in the centre are similar to the well-known discounter stores in Europe. They offer the small packages of food packed, well-known for Westeners, along with hygiene articles and drinks. Only few locals can afford to buy soft drinks, tea, cookies and the popular ground nuts and cashews. The prices are in the upper range and are partly higher than in Germany.

How will Dar es Salaam develop? The growth of the city into the area and the incalculable increase in population exacerbate the problems that have long made life difficult for many people due to the deficient infrastructure. A new bus station for express buses, new roads and bridges only provide short-term relief for traffic. Only a small part of the population is living in permanent homes. At least 1.2 million apartments are currently lacking. Officials estimate, that 70 percent of all people in Dar es Salaam are living in informal settlements, i.e. in settlements with temporary, self-built huts, without electricity, running water, sanitary facilities and without garbage collection. Regular jobs are scarce; many make a living from casual work, trying to sell something or offer small services, even if it is guiding a stranger around the market.

While working on this text, the coronavirus has reached East Africa and dominates the headlines in Tanzania as well as in Europe. Stopping the spread of the virus in Dar es Salaam is a challenge that comes on top of the current ones mentioned above. How can physical distsancing be implemented effectively in a city where people are living so close. How could the curve of new infections be flattened, where people use the streets for all kinds of activities. How could the spread of the virus be limited, where neither the access to clean drinking water nor to disinfectants cannot be taken for granted? Tanzania has not yet followed the example of Rwanda and Kenya, which are pursuing a ‘shut down‘ strategy. Churches still invite people to worship, and buses and taxis still operate. People are going to work.

For further reading and up-to-date information:

One Reply to “Dar es Salaam: Urban life in a mega-city”