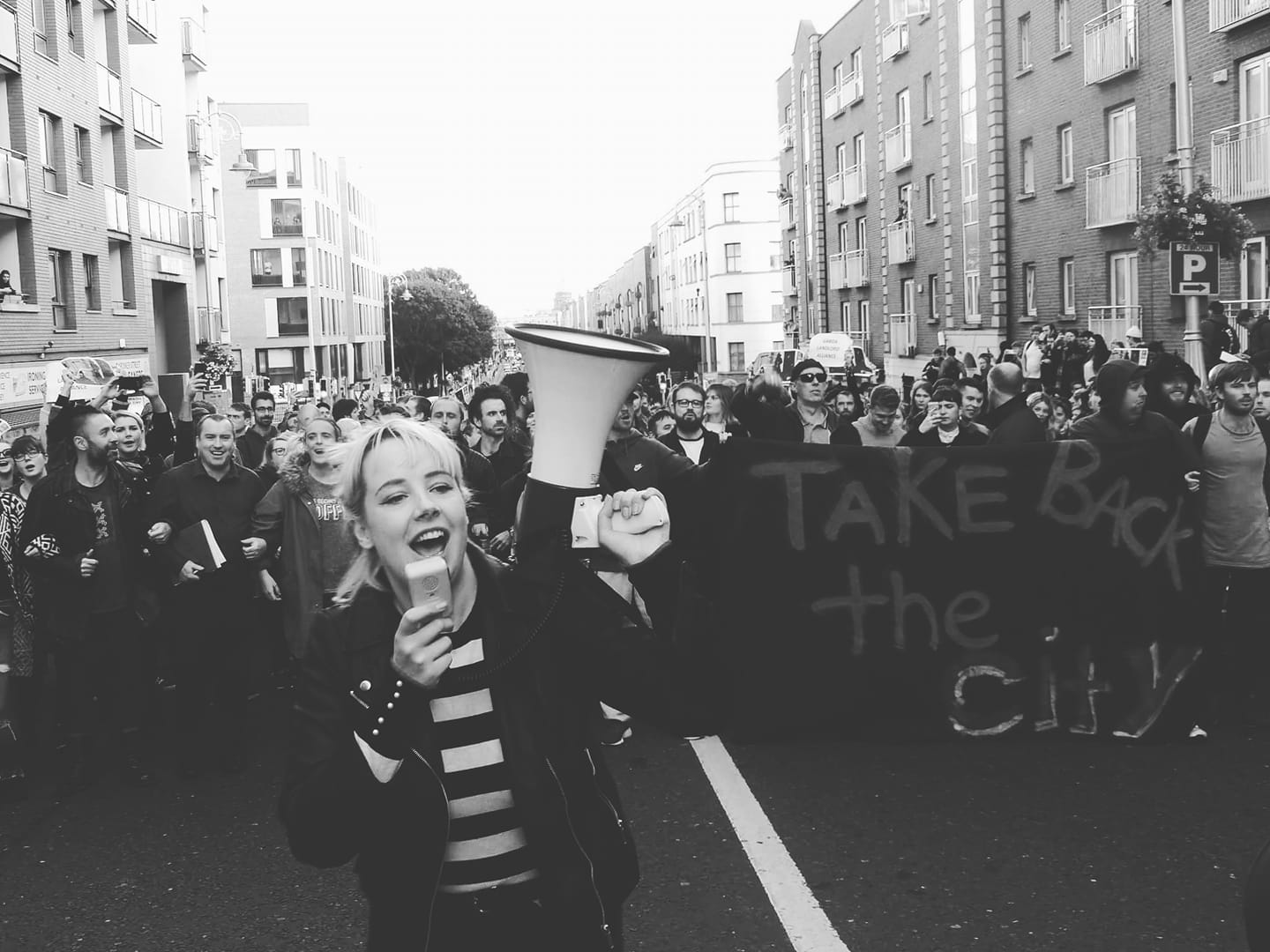 After his return to Dublin in 2007 he began to notice the increasing number of people sleeping ruff in front of the shops in the city centre. Back then he fell on atears at his workplace because his colleagues either didn’t believe him or claimed they were drug addicts. But since then the problem has worsened to a point where it is no longer possible to talk down the problem of homelessness.
Thanks to his experience abroad, Murphy has found parallels with the housing situation between San Franscico and Dublin. Both being cities which aren’t affordable for the working-class.

The current homelessness problem leaves him with a bitter aftertaste. Especially since he himself was affected five years ago and had to fight to pay off his mortgage. Five years ago, when he himself was affected by mortgage payments on his apartment, the current situation touched him. Murphy archives the streets of today’s Dublin with his camera.

When I was in Dublin at the beginning of July last year, some situations caught my attention: On the one hand, the many tourists and language students who led an exuberant life between learning English and bar hopping. And on the other hand the high number of homeless and homeless people, who stood in contrast to the huge number of empty and barricaded houses.

According to the Focus Ireland charity and government surveys, the number of homeless people in Ireland in 2014 was just under 4,000, rising to almost 10,000 in four years. Individuals and families in private tenancies suffer. In October (2018), 1700 families, including 3725 children, went to emergency shelter.
But the number of unreported cases is probably much higher, as many people get caught up in their social network of friends and acquaintances ( – couch surfing). However, these cases are not recorded in the statistics.

No apartments despite rampant vacancies 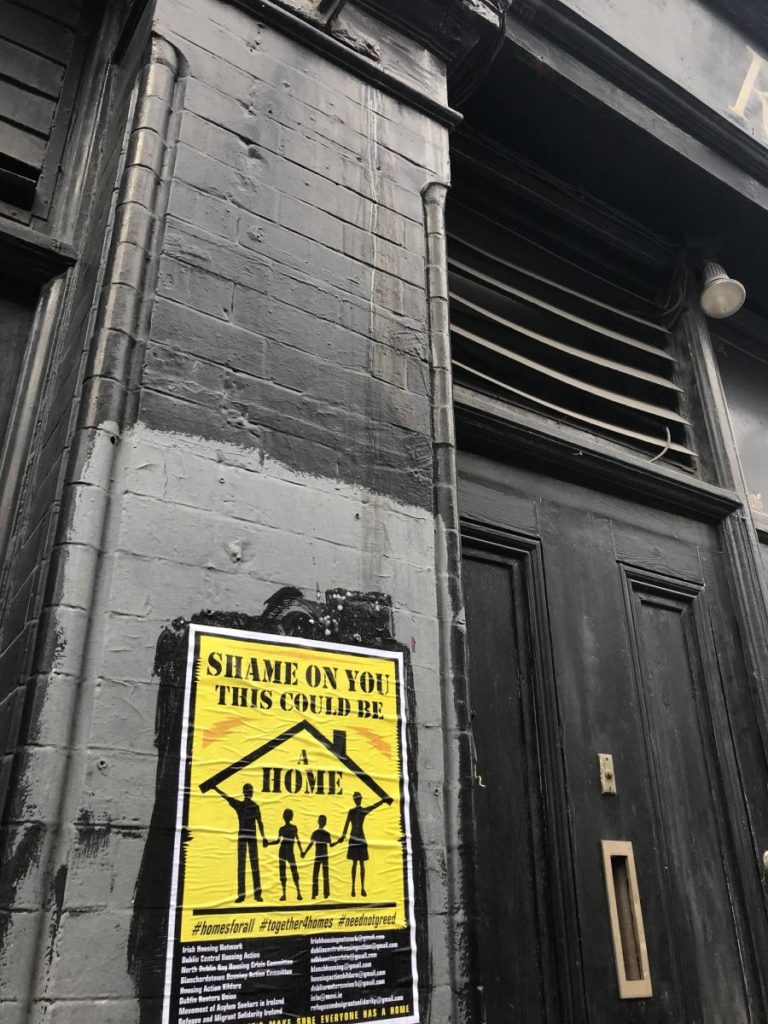 The vacancy is easy to see – between the barricaded windows, decaying facades and high barriers of these buildings. The following year, when the Housing Agency published a vacancy report for Dublin, 38,000 vacant properties were listed. Since then, according to TheGuardian, the number has fallen to 30,000 vacant properties by 2018. Yet the number of homeless people has increased which is why people have to sleep on the streets despite such a large amount of unused residential space.

However, the affected citizens do not admit defeat and begin to point out the grievance by creative methods. The Irish Housing Network (IHN), for example, called in the summer, for vacancies throughout Ireland to be marked with yellow posters. On a yellow background, the outline of a family under a roof is displayed and joined by the sentence: “Shame on you – this could be a home”.

The problem of vacant buildings, which are either in very poor condition and have been waiting for years for a new development or remain unused for speculative reasons, characterises the urban landscape. Dublin, with its high rents, is lucrative for real estate sharks, who are driven up by vacancies.

Providers such as AirBnB also take Irish housing away, as the owners, in addition to a high profit margin, do not have to adhere to the classic tenancy law. Dublin, as a university and language school city, is particularly affected. But the 1300 holiday apartments and 1100 rooms listed by InsideAirBnB are only the tip of the iceberg.

In the clutches of the Irish Slumlords.

Those who end up in such dubious tenancies rarely receive the prescribed rental book. In this the personal data of the owner must be noted, as well as a listing of the past rent prices show. It is intended to protect tenants from arbitrariness, but in the absence of rigorous implementation, this rule is disregarded in many cases. Those affected find themselves in a dilemma because they depend on accommodation and do not always have the means to assert their rights.

Quick poll for Irish tenants putting up with dodgy landlords and agents. Have you ever been provided with a rentbook as required by law? (Irish as in renting in Ireland, no passport required).

The six tenants at Mountjoy Square in Dublin 1 found themselves suddenly on the street at the end of last year when they found themselves expelled from their apartment on 13 December. The owner had changed the lock on the front door and put all their belongings in plastic bags on the street. Previously they had gone to court against their landlord. The state of the apartment, with a broken window and mold on the walls, as well a preceding arbitrary rent increase from 650 to 750 Euros, had become too much. The expulsion, which took place in winter, is considered illegal by Slumleaks.

So one of the affected people of Mountjoy Square told Slumleaks about the payment of the rent: “Every month we collect our rent and Paul Howard or one of his friends comes by to collect it – altogether 4200 € in cash..”

Dublins answer to the crisis

The begin of a summer of occupations

For months now, the Dublin Central Housing Action has been organising a Facebook campaign against Pat’ODonnel. This and his investment fund, the “Co Ltd Retirement and Death Benefit Plan” – a pension fund of 67 members. At the beginning of August, a spokesman told the Irish Times that the O’Donnels did not own the properties in the Summerhill Parade. However, in mid-August, Pat’ODonnel filed a lawsuit against the occupiers on behalf of his pension fund.

In the video the squat is officially declared, one of the activists gives a speech about the situation of the people and demands a purchase right of the city on Pat O’Donnel’s house.

The words are not heard and ten days later the activists leave the building in a demonstration, marching with a banner: “Build homes, not profits”.

After 25 days – Facing the eviction

11 September – Two weeks earlier, the court had once again ruled in favour of the landlords, but the house remained occupied. More and more people are supporting TBTCDublin. Suddenly that Tuesday evening at about seven o’clock, a sprinter with no numberplate on the front appeared and masked persons emerged. The privat hired contractors tried to gain access to the house and only calmed down when the local police arrived and took over.

“Our city,” the activists shout as the building door is boarded up pic.twitter.com/eTObIERa0p