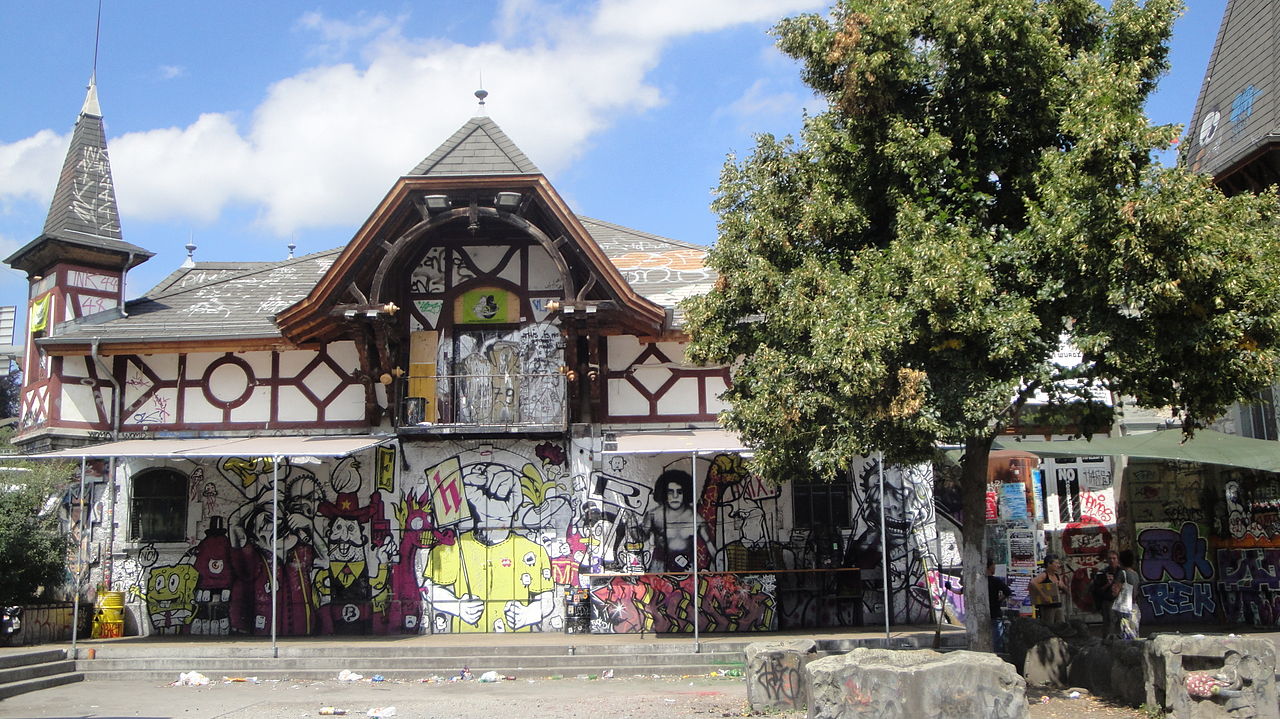 On Friday evening, 23 November 2018, several dozen police officers stormed the courtyard of the autonomous Bernese Cultural Centre Reitschule. 15 men were reported to the police – 13 on suspicion of drug trafficking and two others for obstructing the operation. Among the men were nine Nigerians and one each Iraqi, Syrian, Sudanese, Moroccan and Ethiopian. Four of the men were finally arrested for illegal residence in Switzerland.
The reporting of the two parties could not be more different: On the one hand, the police, who speak of several people who had harassed them and obstructed them in their operations. An unknown person would even have shot them from the balcony with a slingshot. The riding school’s media group, on the other hand, claims that at least one person was injured by rubber bullets. In addition, the restaurant “Sous le Pont” located in the Reitschule had been affected for hours.
Thick air prevailed however already before. Already on 1 September 2018 there were riots between the police and visitors to the Reitschule, where the police, according to their own statements, were thrown at with water balloons and attacked with fireworks, iron bars and bottles after patrolling the riding school in full gear. The “Reitschüler”, on the other hand, testify that they were shot with rubber shot at head height. The rubber shot had been marked with smileys and other inscriptions, which substantiated the suspicion of a planned escalation, writes the media group of the Reitschule. Police spokeswoman Jolanda Egger says that the police do not do such a thing, because it would contradict their principles. The deployment would be checked by the police.

The following video shows a person filming the operation who was sprayed with pepper spray:

Is the suspicion of a planned escalation justified? The police themselves speak of their strategy as a “preventive presence marking”, which they consider necessary due to the increasing number of cases of serious bodily harm in urban nightclubs.
According to Reto Nause, security director of the city of Bern and CVP politician, it is not a good idea to avoid the Reitschule simply for fear of escalation. There must be no such thing as “lawless spaces,” he notes, stressing that the strategy of preventive presence would be maintained even after riots. By the way, Nause was banned from the Reitschule on the same evening of the last events on 23 November, when he apparently happened to be strolling around the forecourt after a concert. What he reacted to with incomprehension was that the state would subsidize the cultural center, and that the fact of being expelled from a public space was a contradiction in terms. The Reitschule, on the other hand, countered that the storming of a restaurant does not exactly testify to tolerance and dialogue.

In the course of the events the desire for bodycams was not expressed for the first time: the mini cameras on the body of the policemen should provide for more transparent operations. Today, filming within the legal framework is only permitted at public events in the Canton of Berne if there are concrete indications that criminal offences could be committed (for example, at unauthorised rallies). It was only in April that an unauthorised Afrin rally was dissolved by the police. As a result, on 30 August 2018, the Bern City Parliament ordered an independent investigation against the will of Nause.
Whoever may have thrown the first stone, there are different opinions among the population about the autonomous cultural centre. “Close the shop”, demand those who see in the “Reitschüler” above all useless riot brothers. But more differentiated opinions warn against a shift in the problem of drug trafficking. And what about the street next to the Bundeshaus? Nobody would say a word about that either, according to the cynical reply of an anonymous user. The voting results so far speak a clearer language: the Bernese electorate has already voted five times on the abolition of the centre, but each time they were against it. The last time the sale of the building was rejected was in 2010 with a majority of 68.4% votes. A clear commitment to tolerance and cultural diversity, said city president Alexander Tschäppät (SP).